Anna considers herself a body person rather than the intellectual type. She is addicted to physical activities like walking, running and working out. Making art is very physical and Anna is grateful that her body still works after 50 + years.

Anna was born with a hole in the heart. Early surgery made her heart strong and good again, but the medical history with long periods in hospital stayed with her and still impacts her life and her art.

When her sons were young, she depicted ambivalent feelings about motherhood by painting a huge mom and a tiny, baldheaded boy. In the series with the little bald guy from 1995-1998, the shapes of the two recurring bodies describe how she herself felt being little and how she at the time experienced being a mother. Little bald guy series >>

The little bald guy left in 1998, but the huge woman stayed and got a face and a head, although small. The body of this woman is oversized, hands even more, breasts petite and head bald. Anna painted nothing but this image for seven years. Some people wonder why she is bald – does she have cancer? No, but for Anna, vulnerability is depicted as baldness. The large hands mark what is most important apart from a strong body – hands able to create. Women >>

In 2006, Anna was through with the large woman. She was in her mid forties and increasing bodily ailments started to reflect in her art work. The artist wanted to describe how painting could help heal the wounds and produced a one year series fusing inner organs, such as heart and colon, with plants. The organs, broken and damaged, are embraced by healing plants.
Organs and plants >>

From 2007 and onwards, flowers and greenery have been her theme. The body is still the starting point while what you see are mystical plants and impervious vegetation. 2007 and onwards >> 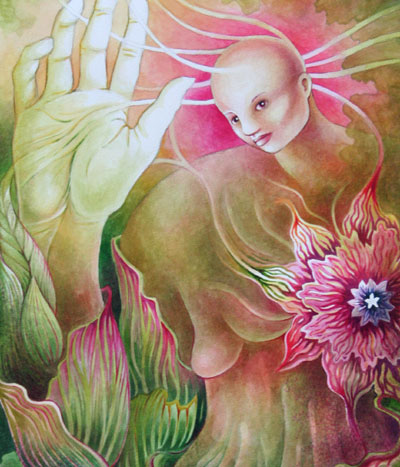 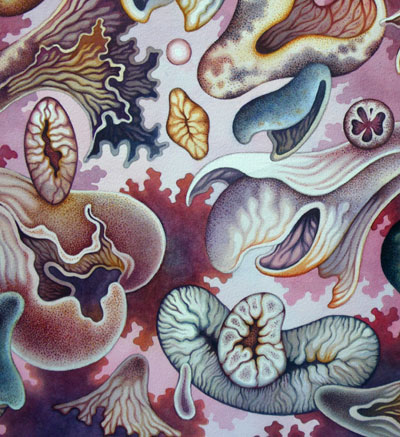 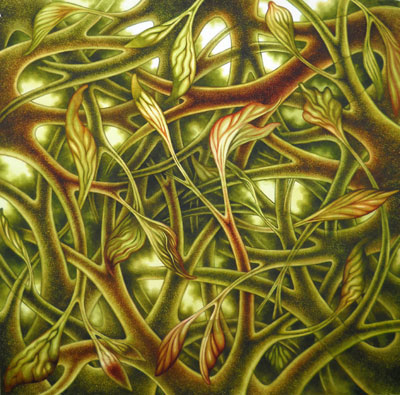